It is not easy to express Assam in such a small blog. but Try to figure out the most important 25 facts about Amazing Assam. Assam is a gateway to Northeast India. Assam is not only proud by its wildlife, multiple cultures, natural beauties, the hub of goddesses, proud for natural oil and gas, and also for the widely spread forest. This thing You should know of Assam.

Here the 25 Facts About Assam:-

one-horned Rhino only existed in Jurassic-era and  Kaziranga. Interesting facts are that two-third (90%)of world one horn rhino available only in Kaziranga. This park is 430 square kilometer widely spread in Golaghat, Nagaon and Karbi Anglong district. In the year 1985, the park was declared as a World Heritage Site by UNESCO. According to the census held in March 2018 which was jointly conducted by the Forest Department of the Government of Assam and some recognized wildlife NGOs, the rhino population in Kaziranga National Park is 2,413. Kaziranga was declared as Tiger Reserve in 2006.

World’s largest river island “Majuli” in Guinness Book of World Records, situated in the middle of Brahmaputra river, Assam. In 2016 Majuli became the first island as a district in India. Majuli is famous for its devotional sight, culture, and natural beauty which attract the tourist most.

World’s smallest river island umananda also situated middle of the Brahmaputra river in Assam. It is famous for the shiva temple and the umananda temple.

3. Assam Has Its Own State Anthem

Assam has its own state anthem “O Mur Apunar Dekh” written by Lakhminath Bezbaruah. In the year of 1927, the anthem of Assam officially adopted.

Assam is the World’s largest tea-growing region. Also, All over India Assam produces the largest amount of tea. An interesting fact is that the British first introduced tea plantations in Assam.

The Kamakhya temple considered as oldest “Shakti Peeth” which is situated in “Nilachal Pahar” Guwahati, the major city of Assam. Among the 51 “Shakti Peeth” kamakhya is the most powerful “Shakti Peeth”.It is said that Sati’s yoni or ‘vagina’ and ‘womb’ fell on this area when Lord Vishnu disintegrated Sati’s body with his Sudarshan chakra in order to pacify the enraged Lord Shiva. These two parts of the Goddess stand as a symbolic representation of the power to create a new life that every woman possesses.

Also, mythology tells that this is the place where the goddess used to have her intimate encounters with Lord Shiva and that too signals the start of a new life. Since everyone comes to this world through ‘yoni’ that is why this place is considered as the center point of creating the whole Brahmand.

The Brahmaputra is one of the major rivers in Asia, running 2,390 miles in length. It is a transboundary river flowing within the boundaries of China (Tibet), India, and Bangladesh. In Tibet(china) its called the Yarlung Tsangpo. The Brahmaputra enters India in the state of Arunachal Pradesh, where it is called Siang. It makes a very rapid descent from its original height in Tibet and finally appears in the plains, where it is called Dihang. It flows for about 35 km (22 mi) and is joined by the Dibang River and the Lohit River at the head of the Assam Valley. Below the Lohit, the river is called the Brahmaputra, enters the state of Assam, and becomes very wide—as wide as 10 km (6 mi) in parts of Assam.

south through Bangladesh as the Jamuna. In the vast Ganges Delta, it merges with the Padma, the popular name of the river Ganges in Bangladesh, and finally, after merging with the Padma, it becomes the Meghna and from here, it flows as Meghna river before emptying into the Bay of Bengal.

“Rang Ghar” is one of the oldest monuments in Asia. It is 3 km away from the center of SivaSagar town. The building was first constructed during the reign of Swargadeo Rudra Singha with bamboo and wood. “Rang Ghar” was later rebuilt with a brick by Swargadeo Pramatta Singha in AD 1744-1750. 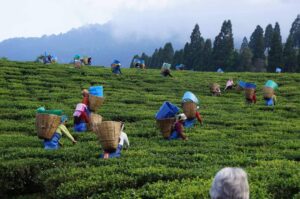 Jorhat is a major city and district in Brahmaputra valley Assam. It is widely referred to as the ‘Tea Capital of India’.It was the last capital of the Ahom dynasty and is home to some of the oldest historical monuments of Assam. Jorhat produces large quantities of tea which is exported to different countries. 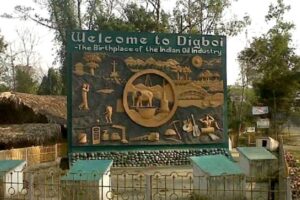 Digboi has the oldest oil as it operates. Crude oil was discovered here in the late 19th century and the first oil well was dug in 1866. Digboi is known as the Oil City of Assam where the first oil well in Asia was drilled. The first refinery was started here as early as 1901. It is also famous for Digboi is also famous for the Saikhowa Wildlife Sanctuary, the Golf Course, and its War Cemetry.

Assam State Zoo is the largest zoo in North East India, spread across 432 acres of land. It is in the capital city of Guwahati, and it is home to almost 113 species of animals and birds from all around the world. It attracts hundreds of visitors every day because of the large number of animals like Tigers, Himalayan Black Bears, Golden Langur, etc.

Kalakshetra is situated Punjabi, Guwahati. It includes a cultural museum, library, and various facilities for preserving, demonstrating, and performing cultural items, a children’s park. It is one of the most popular tourist destinations in Guwahati. The museum exhibits different types of items that are used by the diversified ethnic groups of Assam. A number of cultural objects of the state are also displayed in the museum. There is an open-air theatre on the premises, where traditional dance and drama are performed.

The Hoollongapar Gibbon Sanctuary renamed on 25 May 2004, formerly known as the Gibbon Wildlife Sanctuary or Hollongapar Reserve Forest, located in Jorhat district of Assam, India. The sanctuary was officially established in 1997. The sanctuary has rich biodiversity and is home to the only apes in India.

Sualkuchi is 30 km west of Guwahati. It produces a large amount of silk and is in huge demand all over the world. Sualkuchi produces the three major types of indigenous wild silks they are golden Muga, white pat, and warm Eri silk.

the second-largest handicraft of Assam, after baboo craft. Bell metal is an alloy of copper and tin and utensils made from it are used for domestic and religious purposes. The principal items of brass are the Kalash (water pot), Sarai (a platter or tray mounted on a base), kadhi (dish), bati (bowl), lota (water pot with a long neck) and tal (cymbals). This craft form dates back to the 7th century AD.

Tocklai Tea Research Institute, Jorhat, the oldest and the largest research station of its kind in the world.the establishment of the Scientific Department of Indian Tea Association (ITA) in the year 1900. The formation of the Tea Research Association (TRA) in 1964 with Tocklai at the center of all activities further expanded the horizon of tea research to cover entire Northeast India.

The Dhola–Sadiya Bridge, also referred to as the Bhupen Hazarika Setu. The new, three-lane, 9.15-kilometer Dhola-Sadiya bridge of River Brahmaputra links Dhola in Assam to Sadiya in Arunachal Pradesh. It brings Assam and Arunachal closer.

Dhekiakhowa Bornamghar is situated in near Jorhat district of Assam. It is a beautiful and vibrant center of Vaishnavism and the culture of Assam which was established in 1461 AD by Sri Sri Madhavdev, the great disciple of Sri Sri Sankardev. A Mysterious lamp has been burning continuously for more than 450 years as recognized by the Asia Book of Records. According to sources, the lamp was first lighted in 1528 in Dhekiakhowa Bor Namghar and has been kept burning since then by the locals.

Jatinga is a small village(Borai Hills of Assam) is in Haflong(only hill station of Assam).In Jatinga 44 species of birds have been committing to suicide in the month of September every year. It’s not for the only time it’s For over 100 years, every winter, thousands of birds have committed suicide; the reason for which is still a mystery. Still not find the actual reason for this cause.

A very Mysterious town Mayong Situated in Morigaon district. The word “Mayong” is derived from a Sanskrit word “Maya,” which means illusion. Mayong finds its mention in the mythological epic Mahabharata, along with Pragjyotishpura (ancient Assam). Legend has it that Chief Ghatotkacha took part in the battle of Mahabharata after attaining different magical powers from Mayong. People in the village even believe that many older saints and witches who practiced black magic still take shelter in the jungles here. Know more about Mayong

In 1829, India became the first country outside Great Britain to have a golf course. Now Assam has plenty number of golf courses inside the state. Later on, Golf becomes famous for tea-planter.

In Jagiroad, Morigan District has Asia’s largest dry “fish market”.The market operates for three days a week and exports to countries like Malaysia, Bhutan, and few other South-Eastern countries.

Search a Song, Artist or Album