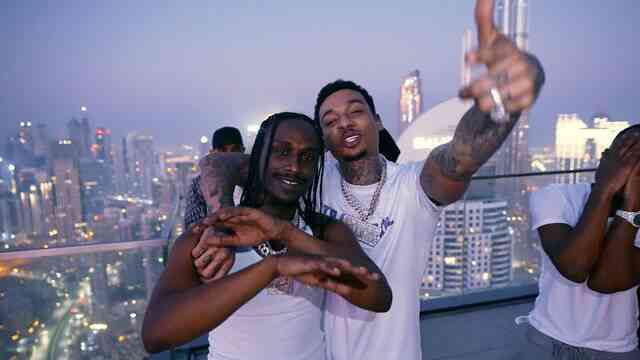 Only the Lord knows all my reasons why them niggas need to die (Yeah)
Tears need to leave my eyes, still, I can’t seem to cry (Cry)
Still chasin’ money, yeah, I guarantee it
Went from sofa surfin’ to surfin’ yachts in the Caribbean
Got millions chillin’ in the bank while I’m still chillin’ with the gang (Gang)
Gamblin’ all night, smokin’, eatin’ chicken with my hands
My youngens sellin’ chickens, still livin’ with his Gran’
Free my niggas in the can, swear, it’ll be different when you land
I got that Lizzy, if you need some, run it up off a clean run
Got hand tings and machine guns, my press machine seen tons
So much dirt on my hands no matter how much soap I use, that still wouldn’t clean some (Some)
Probably wouldn’t clean none
Girls and labels think I carе now, they callin’ the same phonе
Now I can make a call, get you corned on the main road
I call this my Dave flow, it’s elegant
Got a brown girl with bread, I call her my DeJ Loaf, she’s intelligent
A hundred thousand was a dream, now we callin’ that a stage show, I’m a veteran (Veteran)
Name a nigga livin’ how I’m livin’ that I ain’t better than
Had to take a break, now I got new stories, I’m tellin’ ’em
Like how Dave lost sixty-three thousand on a bet with me
Now I bet he you that he won’t never bet with Fred again (Never)
Pretty girl with me, she looks heaven sent
But after all the stuff done, I’m tryna see if I can get in Heaven as a plus one
‘Cause Lord knows on earth, all my feelings and my love’s done
It’s like I only love Mum, my little princess, and I love guns
I love my niggas too, but I don’t trust none
The same goes for hoes, so it’s just fun
Countin’ up a hundred cash like look at what this stuff’s done
Yeah, that tour life’s risky, it ain’t just fun, the second that the bus come
Fuck a PlayStation, I’m tryna see where we can stuff guns
All I wanted to make was a hundred K just once
Now I got that money in just Dunks
And that’s word to Kick Game, now I’m workin’ on the whip game
Was pullin’ up and beatin’ whips ’til whip came (Whip)
Now the way the Lambo pulls off and whips could really make a chick claim
Neck pains and back pains
I got them same pains from all these mad chains
They say the sun don’t feel so good if you ain’t had rain
And they say the fun don’t feel so good if you ain’t had pain
Damn, I’m livin’ in a game where they’ll do anything to have fame
If you ask me, it’s a damn shame, but you’re part of my campaign
And ask for any favour, every answer’s been the damn same (Every one)
They ask how I made it here, the answer is I had brain
Now it’s first-class flights, and they ask if you want champagne before they ask a man’s name
Gotten used to this life and gotten used to useless yutes
Givin’ me useless advice on what to do with my life
I’m in this foreign car, used to just be trains in Serco (Serco)
The G Wagon cost me one-fifty, I named it Herbo
Off the lot, I’m white, it weren’t the same as Virgil
More like the same as Persil
Yo, it’s funny how it’s never the truth
They hit the booth and go and change the version
Like how them girls look good on the ‘Gram, but not the same in person
But I’m rich on the ‘Gram and the same in person
Got curvy models down in Spain (Spain) and the same in German
Told her, “I can’t spend the night, I gotta stay determined” (It’s my mistake)
But I love to spend money, that’s my bae for certain
Yeah, I still remember every night and day of workin’ (Every night)
Probably why I ain’t got my bae a Birkin
Yeah, they judge me off my videos, but don’t know me, so let’s make it certain
You can’t be my bae if you’ve even done a day of twerkin’
Niggas broke but chasin’ hoes, that shit makes me nervous (Nervous)
If I never made no P’s, I would’ve stayed a virgin (Facts)
Pussies keep goin’ back, yeah, they stay reversin’
I levelled up about six times, this my favourite version
(Favorite version, my favourite person)