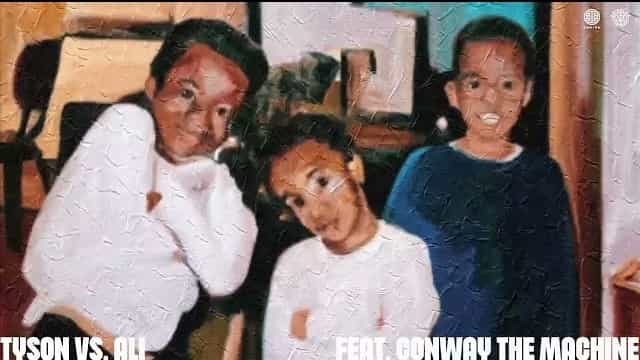 Tyson vs. Ali (Ali)
Tyson vs. Ali
Everybody wanna know who would be better (Tyson vs Ali), Tyson or Ali?
Yo, uh

They compare the greatest to the greatest like Boston vs. the Lakers
Question, do your legacy rest dependin’ on where you rank
Amongst the current and the late? If so, I feel like I’m straight
But rappin’ and sellin’ weight, I just had them genetic traits
Or do people really care? Do they just wanna hear the music?
So confusin’, y’all compare two niggas from the same movement
Only for y’all amusement, it’s funny for me, y’all do it
Truth is, while I’m killin’ this shit, Conway be somewhere rootin’
Y’all niggas still sound the same, put out somethin’ exclusive (Uh)
Need a hundred more soldiers, the word out that I’m recruitin’ (The butcher comin’, nigga)
We throw so many clips, that way, we can make movers (Brrt)
Brick in the car three lanes away from a state trooper
Where I’ma be in twenty years? I ain’t looked that far ahead yet
Workin’ overtime, doc said I should stop, get my leg rest
I made dope re-rock and stretch with a gram press
Made more than a med tech, payin’ double for head taps (Doot, doot, doot)
The bigger the paper, the longer the conversation (What you talkin’ bout?)
Played in the streets where the locks never come with no combination
If I let you get some money, don’t fuck up the operation
You know hood rules apply when it come to this kind of gangster
So your bitch a bottle girl with a gullible occupation
Told her about Buffalo, now she wonder when I’ma take her
Ain’t no tellin’ what other rapper she fucking, so I don’t chase her (Uh-uh)
She down to do anything for a couple more operations, huh
Tana Talk 4, I’m handin’ out raw
You in the slammer by law, I never abandon my boy
They askin’ am I street? My track record standin’ like Floyd
I’m more street than y’all, the fuck I gotta answer y’all for? The butcher, nigga

Ayo, Benny, I remember what we used to do to the fiends (Remember that?)
That’s why it feel so good to see you doin’ your thing (I see you)
Don’t get distracted by the noise, don’t let it ruin your thing (Fuck them niggas)
They tried to pick you off, but that’s really a movin’ screen (Hold up, listen)
Uh, you and your team gon’ see like two or three rings (Ah)
Win that MVP trophy, that’s such a beautiful thing (Yeah)
My bitch don’t do the Gucci bag, she usually do the Celine
Sold pills in the trenches, that’s pharmaceutical cream, ah (Talk to ’em)
Yeah, now those deals worth a mil’ or more
The DeLeon spill and pour (Uh-huh), I got this rap shit in a figure four
You figure for niggas
Westside, Daringer, me, and Benny, y’all lookin’ at the illest four
Niggas that y’all seen in ten years or more (Woo)
I mean, you lookin’ at the team with the winnin’ score (Ah)
Fuck them niggas, kill ’em all
We was in the kitchen whippin’ soft
A nigga life changed though when he got that brick of fentanyl (Talk your shit, Con)
Yeah, it’s been like five years of excellence
But it’s like they don’t respect this shit (They don’t respect it)
Had Angie Martinez like, “Who the heck is this?”
With no album out, gave Mary J. a hundred thousand dollar necklace, so effortless (Hahaha)
I’m buyin’ drip, the tailor takin’ my measurements
Michelin star brunch, Machine been settin’ precedents (I’m eatin’ good, man)
Russian Cream, La Maquina, Butcher Breath in it (Uh-huh)
Tell B Dot I said, “F his list”, Machine, nigga