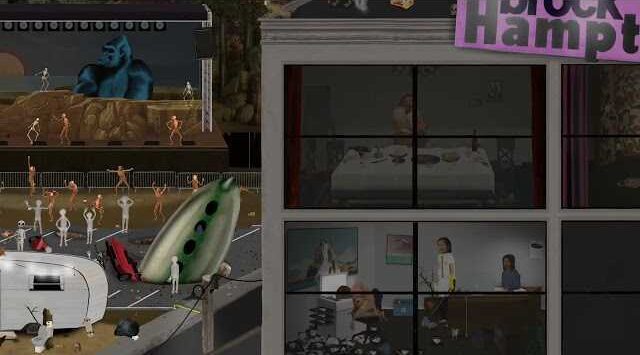 I know I should’ve called you sober
‘Cause I’m right back on my own
Devil on my shoulder laughin’
Sayin’, “Kevin, don’t forget you’re alone”
[Verse: Kevin Abstract]
Y’all know it’s like, y’all got families
But it’s so different from my family from Texas
I know it’s like this but it’s so different
Merlyn saw the Sugar video as if I sold my soul to the dеvil
In some ways I guess I did becausе my momma still livin’ in the ghetto
But any extra signs, yo, yo, that was not on purpose
But I get it ’cause it gets dark whenever Hollywood opens the curtain
I was way less vanilla when I was still a Texas nigga
I was way more Christian when I was still a mormon nigga
I was a hungrier artist when Postmates ain’t deliver to our house in Laurel Canyon
In a mansion, with some niggas I can’t stand, man
But I gotta hold it down for my new fan, man
I gotta hold it down, and hold my stance, man
God bring me a different band, man
As the checks flew, it became harder to leave
Everybody got an ego now, imagine bein’ me
Competition started off so healthy
‘Til one day I looked up like, “Damn, you almost better than me”
I don’t feel guilty for wakin’ you up when you sleep
I don’t feel guilty for cuttin’ your verse from this beat
I don’t feel guilty for heat you caught from my tweets
That project I teased from my lack of empathy
I feel free when I drink, you don’t know shit about me
Y’all don’t shit about me, y’all don’t know shit about me
Quit talkin’ shh
You might also like
The Ending
BROCKHAMPTON
My American Life
BROCKHAMPTON
BLEACH
BROCKHAMPTON

I know I should’ve called you sober (You sober)
‘Cause I’m right back on my own
Devil on my shoulder laughin’
Sayin’, “Kevin, don’t forget you’re alone” (You’re alone)

Okay, I said my piece
The whole room goes silent
Who do I turn to when my thoughts get violent?
When my voice goes hoarse, and we all stop cryin’
We said we’d do this shit for life, now I’m the last one tryin’
I know what it’s like but it’s so different